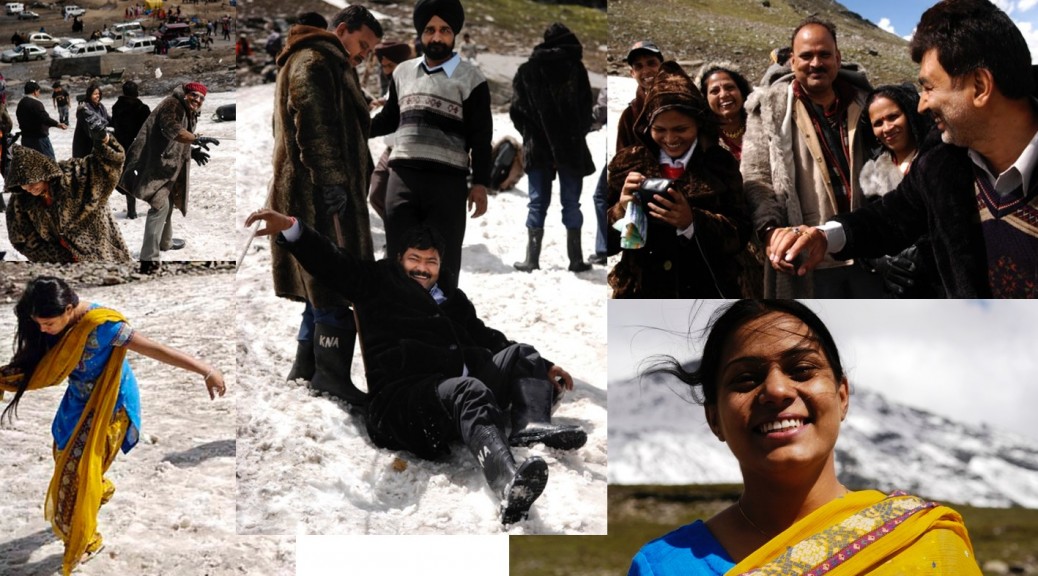 Summertime in India means soaring hot temparatures in most parts of the country. I was visiting the Taj Mahal at the end of april when temperatures went up 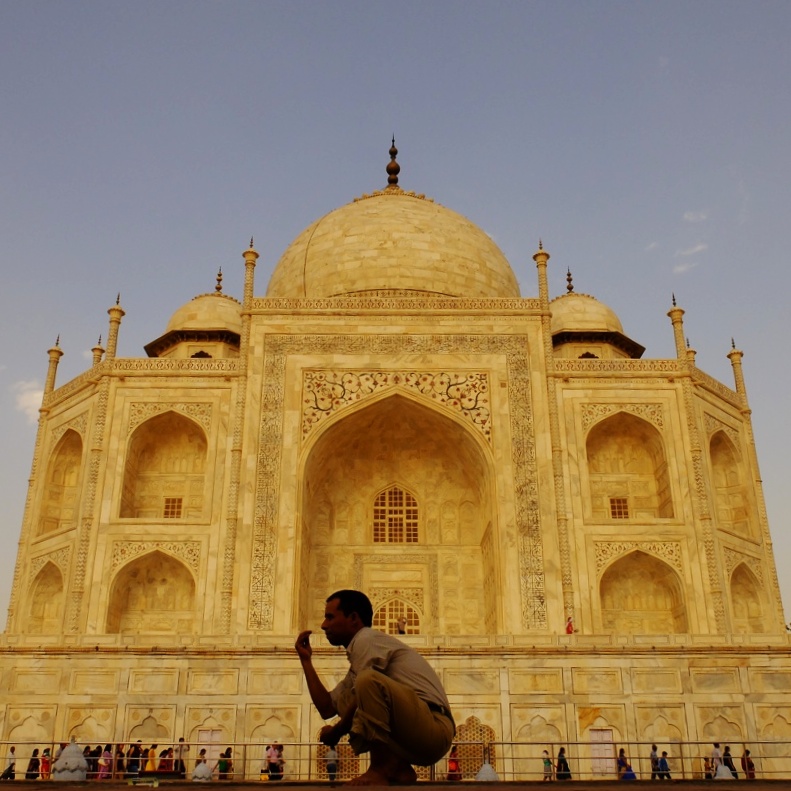 to 45 degrees celcius. As soon as I could I would vanish into the Himalaya’s. First immersing myself in the cooling Ganga water of Haidakhan and then making my way further up.
Moving higher and higher I noticed how a population that has been getting richer over the years is taking more and more holidays. In summertime when the plains around Delhi get unbearably hot people move up to cool down.  The remote Himalaya’s are getting more heavily packed with Indians longing for the summer snow. 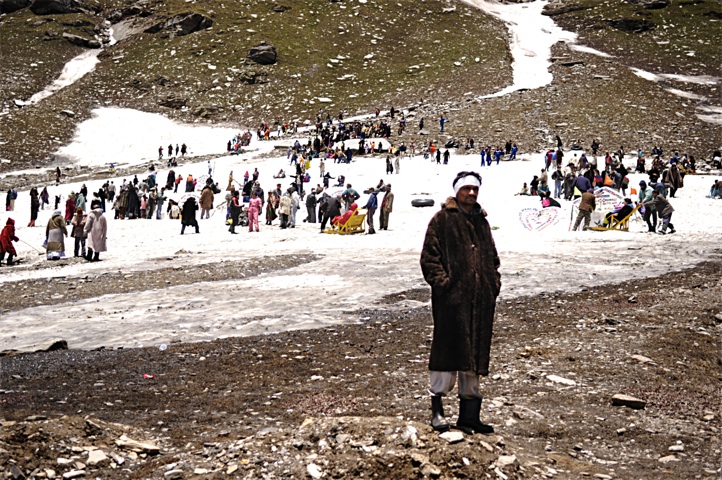 An Indian tourist is a species in and of itself I have learned over the years  in this endlessly fascinating country. They adore noise, either by producing it themselves ‘en masse’ or by soaking fully into it.
I am staying in a quiet hamlet called Vashisht just near the city of Manali.  Indians prefer to stay in Manali as Vashisht is too quiet for most. 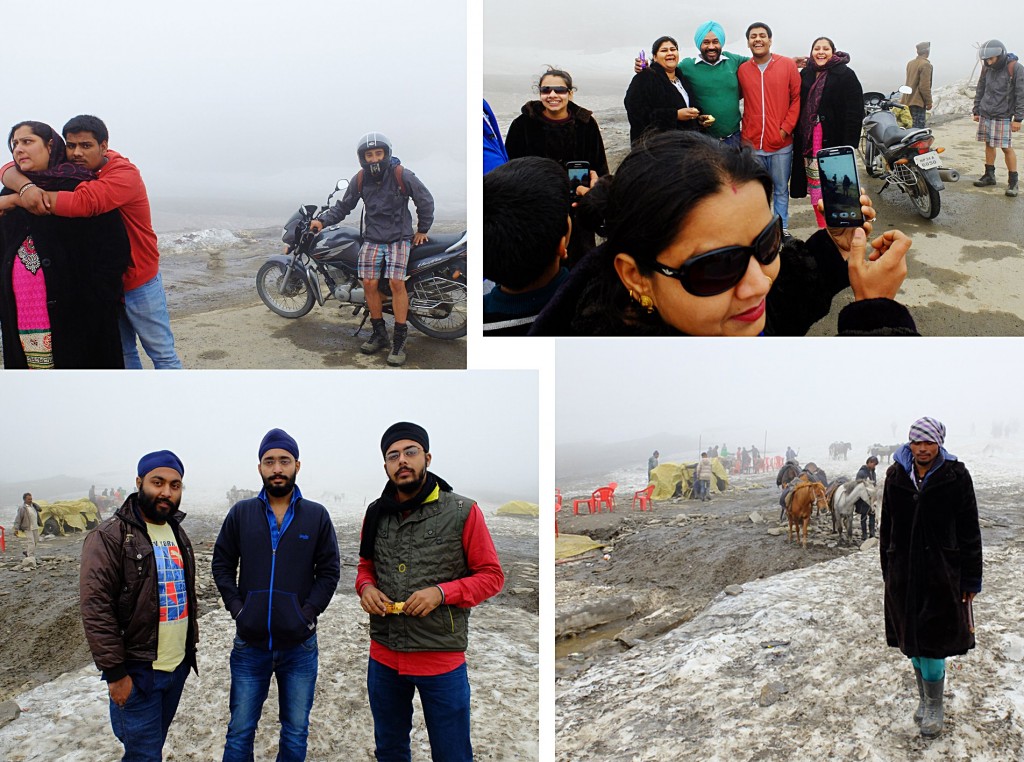 Even though every now and then Indian tourists on their way
to the snowline tend to arrive at 1 am screaming and shouting while smashing the staircase loudly under their feet on their way up.  Some would leave at 4 AM again overly excited and totally oblivious of the much needed quiet rest of me and the other guests.
It is similar to school children who are affected by the weather and who simply are not able to hold themselves.  Why so crazy?
It’s the promise of the snow, the Indian summer snow!
The Rohtang pass on the road between Manali and Leh provides the first ‘real’ patch of snow to engage in and mess with. Along the way up the road is an endless line of numbered  shops selling the appropriate clothing and attributes to enter the scene further up. And Indians tourists with the appropriate coverage behave even more like funny Indians. 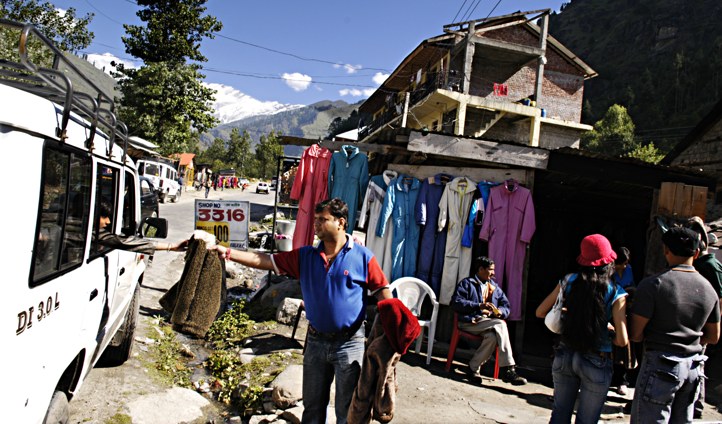 Dressed in costumes that hold the middle between bear skins and fluffy skiing suits the journey goes up  to Rohtang where the play would break loose ! 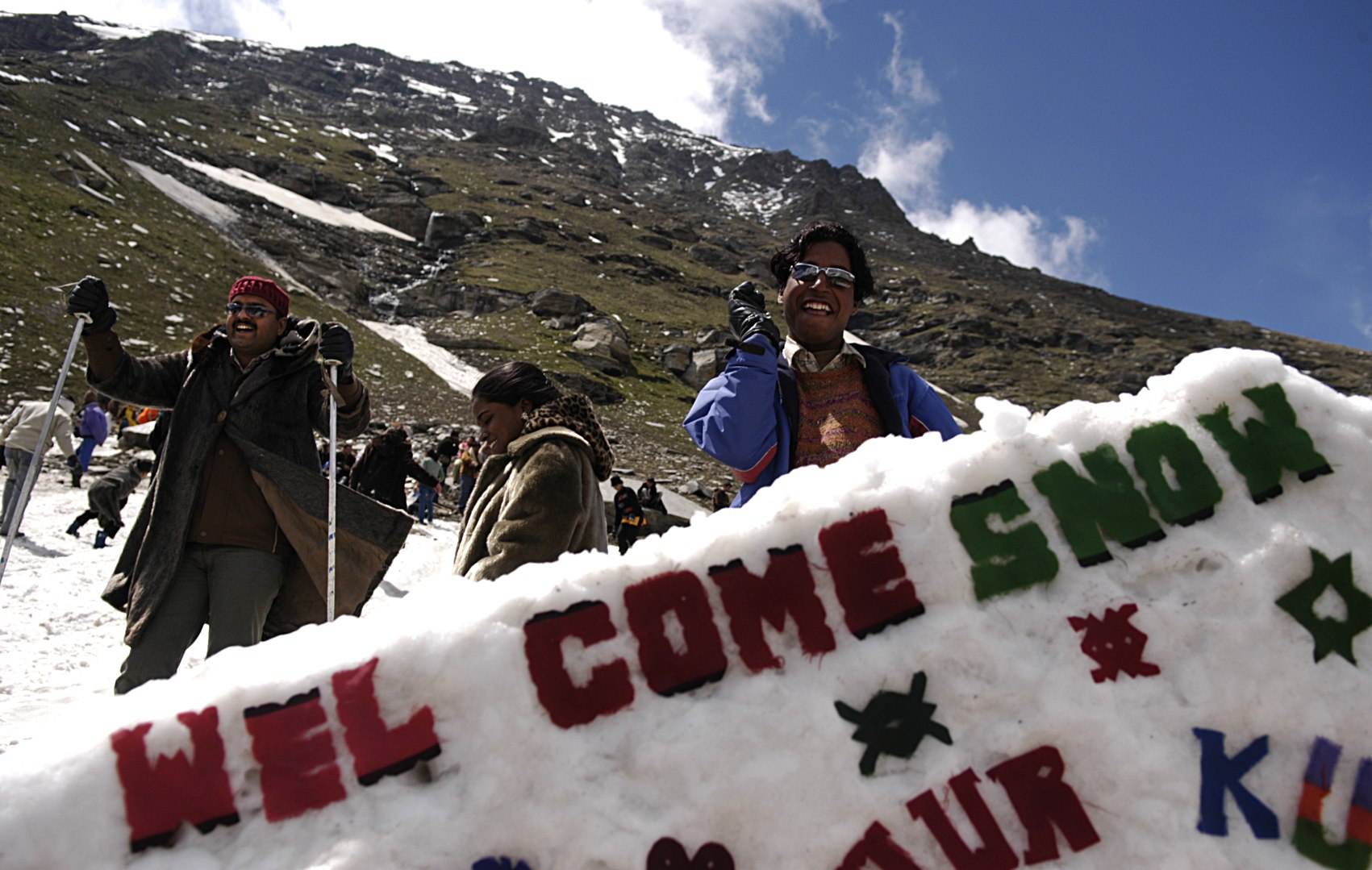 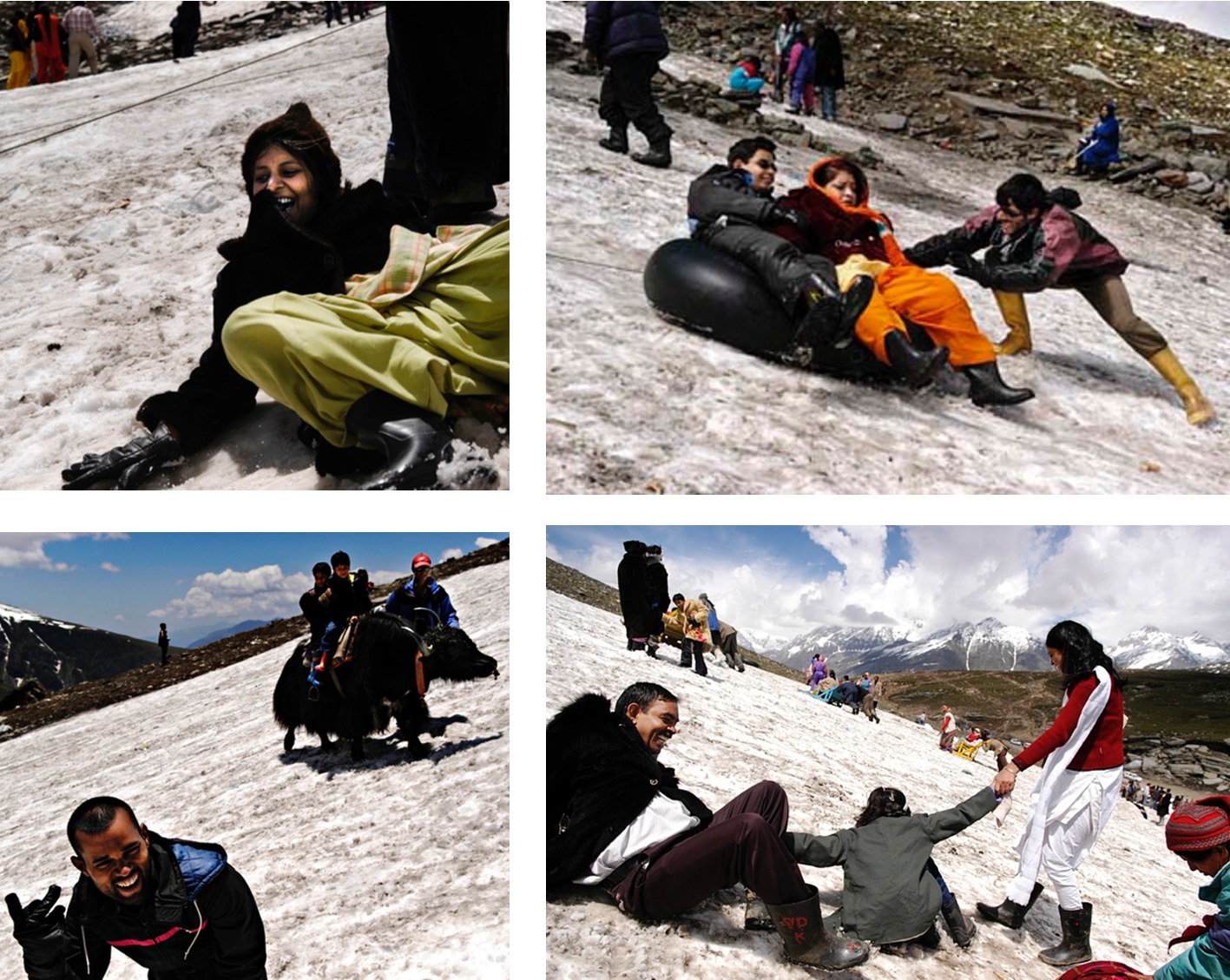 Moving over the white patch of ice, falling down, getting up, falling again, laughing all along, simply having a blast sliding from side to side appearing in many a color of the spectrum.

in between, if at all it comes to their mind, people can go worship their favourite idol in the temple which is adapted to the location, probably the only hindu temple in the country and even the whole world that is igloo-shaped!

Rabbits are present for people to pose with, tires to slide over the snow, sleds to be pushed forward and even skis not for skiing but to pose properly for the photoalbum, an art  which Indians master  like no other… 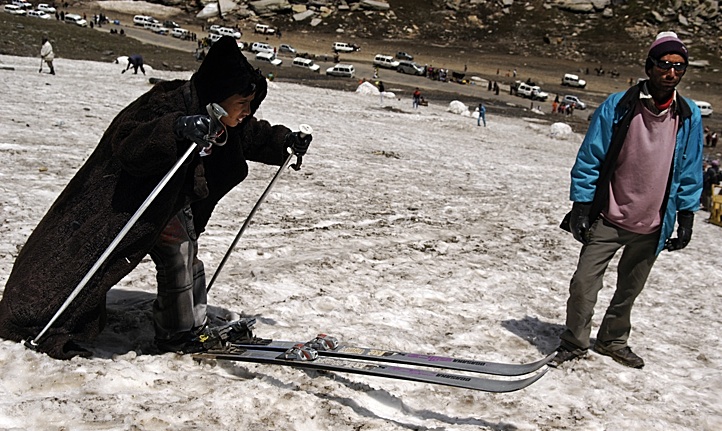 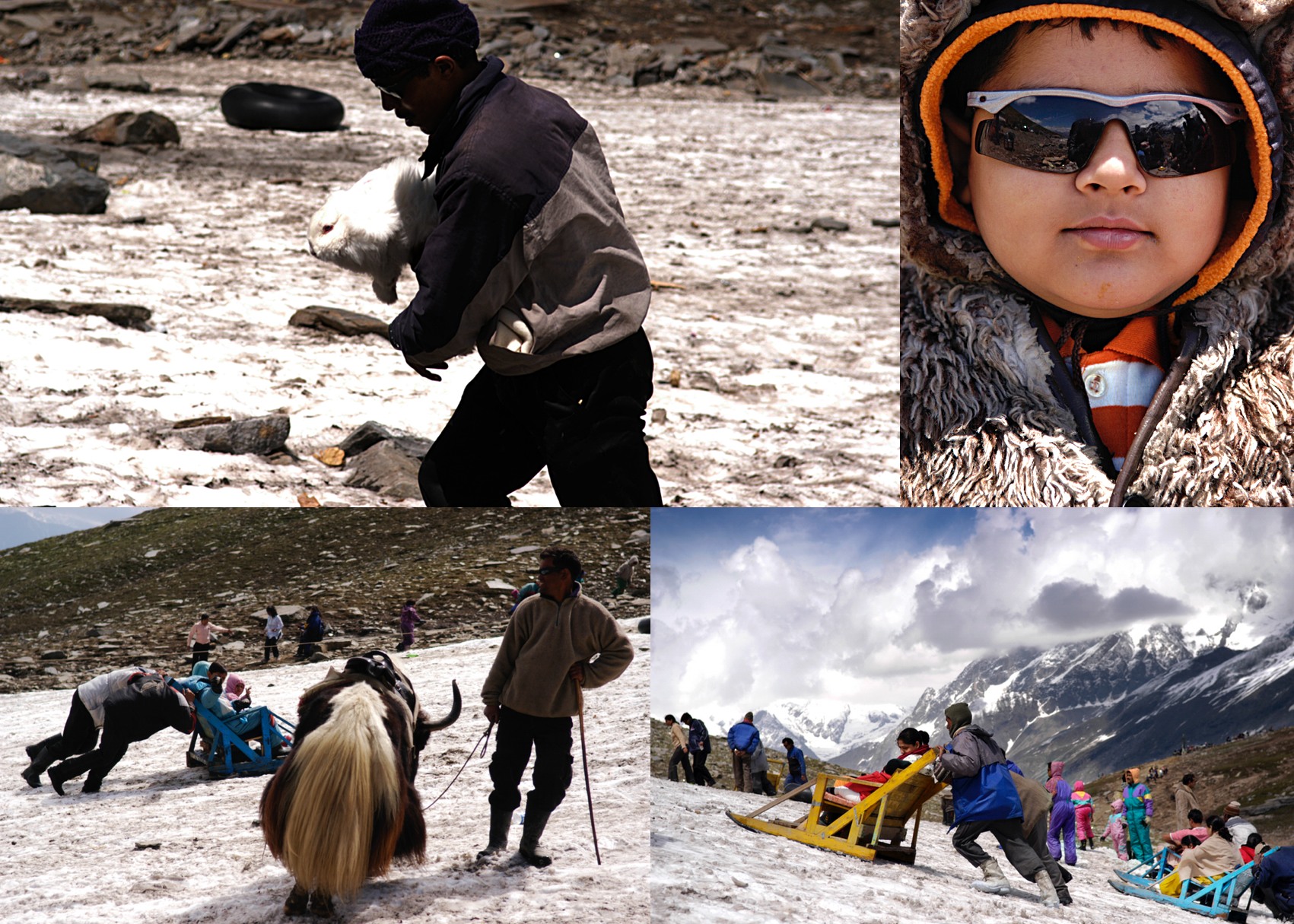 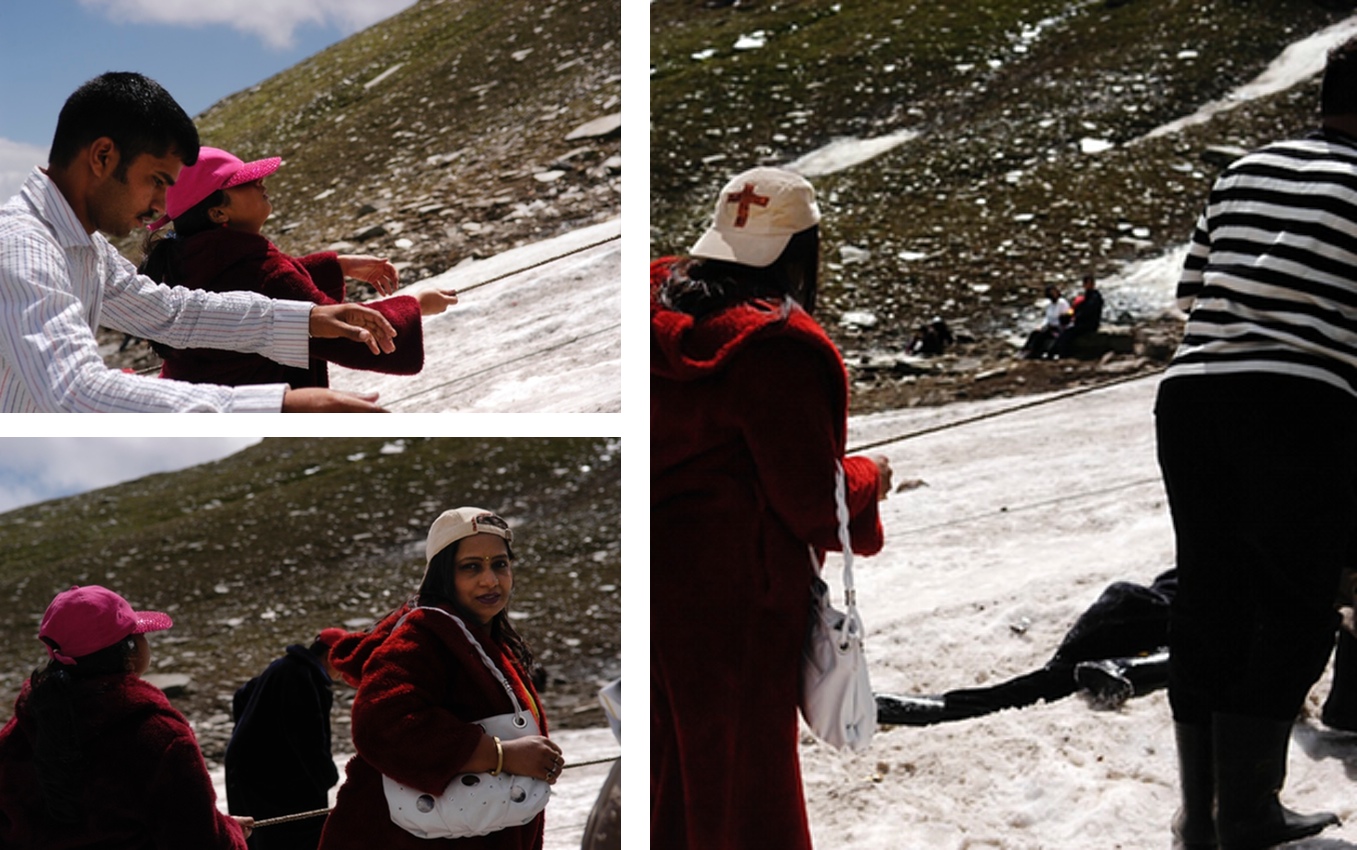 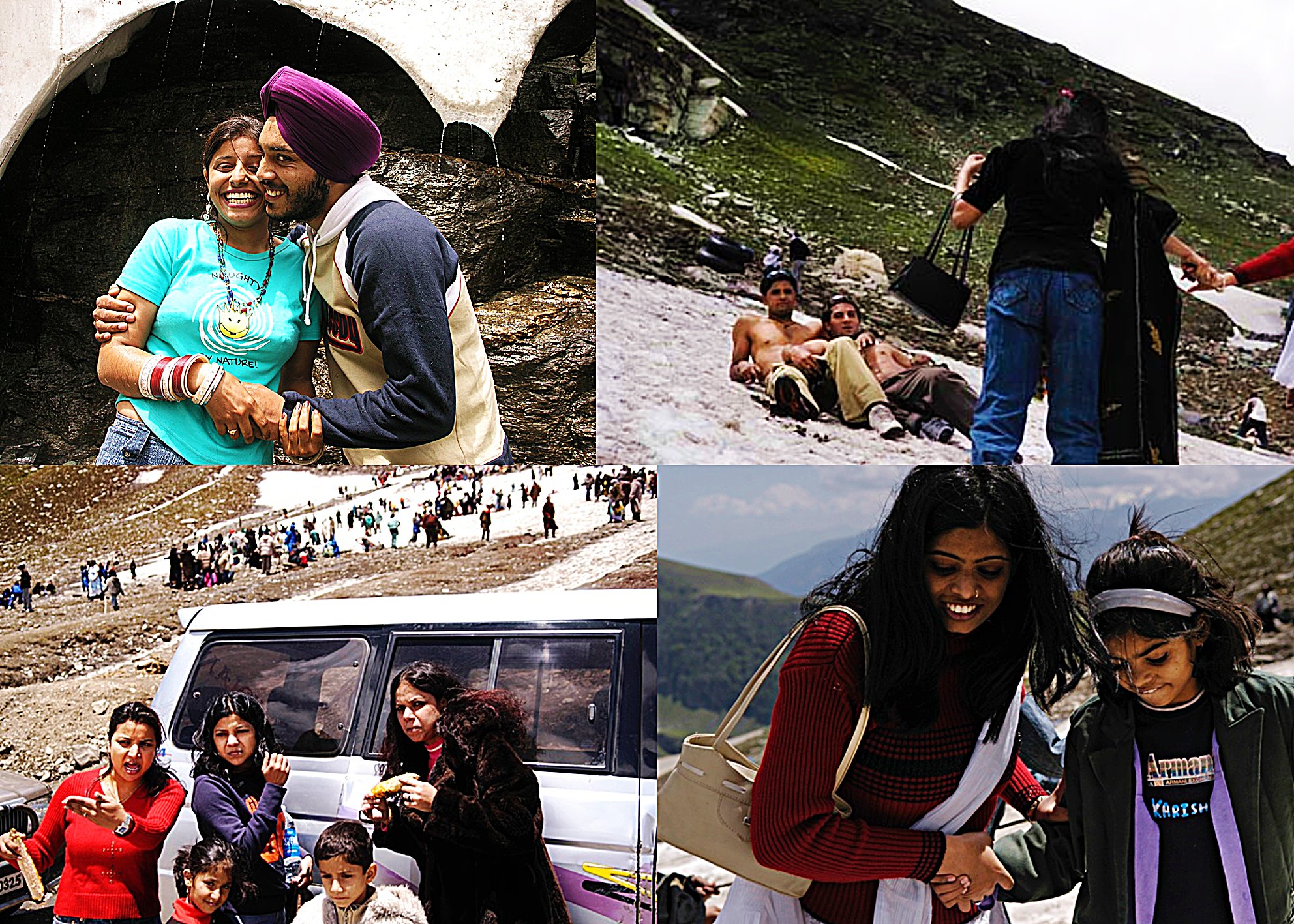